On Monday next, this beautiful watercolour by Harry Kernoff RHA (1900 – 1974) will be auctioned at Whyte’s, Dublin. Seeing it in the catalogue and on their blog brought me back to when I was writing up my M.Phil thesis on the artist, and I used this image to bring my discussion of the artist’s life and work to a conclusion. As the painting encapsulates, for me anyway, so many disparate ideas and notions, I decided that it was worth briefly revisiting it as a blog post. 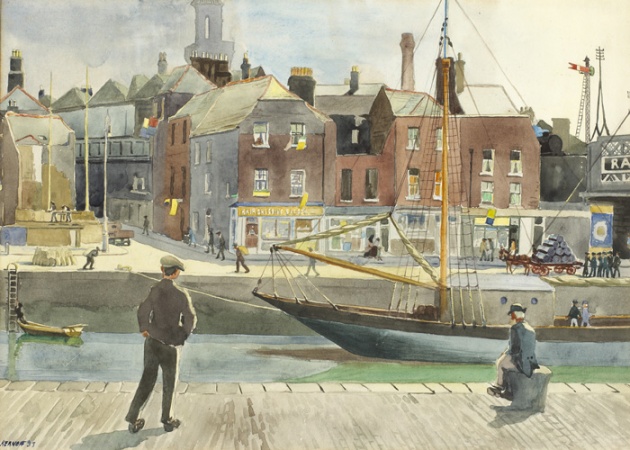 A preparatory sketch for this watercolour in the National Gallery of Ireland dates it to June, 1933, and (sometimes usually for Kernoff!) this date corresponds to that on the finished artwork. The composition takes in the view looking out across the river towards the south quays. The loop line bridge is just visible, with a train just peeping around the corner, heading north. On the far quays, figures continue with their working day; lifting sacks, moving barrels, working on buildings.The hustle and bustle contrasts with the more contemplative mood of the scene on the north quays. Two men survey the work opposite, echoing the artist’s gaze. The soft blues and greens of the painting support the contemplative view; the sun is gentle, and the shadows lengthen on the stone.

This gentleness, I think, is what draws you into the composition, as well as what also suggests a broader reading of the artwork. The location reminds us that Dublin is a port city, and in 1933 the docks continued to play a role in the city’s economic life. The continuing work is a reminder of the many goods and things that the river brought in and out of the city, and the opportunities for employment it provided.

Moving from the contemplative to the conceptual then, I would suggest that we can see this small gem as being somehow symbolic of the artist’s position in Dublin. This is very much a working framework at the moment, but I think the way in which the artist was drawn to water, weather it’s the canal, the river or the sea, is very interesting. Born in London, to Russian immigrant parents, and moving to London with his family aged fourteen, Kernoff was in many ways an outsider in Dublin. Even at the end of his life, he spoke with a London twang, and appeared to be most ‘at home’ when engrossed in his work in his attic studio. For me, it is the artist’s depiction of fluid (literally), moving, border and boundary spaces (the canals were considered the city boundary, before the new suburbs came under the Corporation), or these ‘in-between’ spaces that reflect the artist’s personal journey to Dublin, and to the career and life he made there.

I often wonder if, as he pondered and drew on the steps of the recently rebuilt Custom House, the artist was aware of the changes that were taking place across Europe and the wider world. The restoration and rebuilding of Dublin after the Rising, War of Independence and Civil War had recently been completed, but the world was reeling from the economic and social effects of economic collapse and depression. Earlier in 1933, Adolf Hitler had been elected Chancellor of Germany, the Enabling Act had been passed and Nazi control was solidifying. The artist had a strong interest in Russia, having visited the USSR in 1930, and was perhaps aware of current affairs there.

I would argue that instead of simplifying artworks such as this one down to pictures of ‘lost’, ‘old’ or ‘vanished’ Dublin, we should instead seek to further situate them into the lives of their creators, and the wider historical context that they were created in.A painting such as this was not created in a vacuum  nor should it be considered in just one particular way today.

Finally, and as my pockets are too empty and shallow, I hope this jewel of a painting is snapped up on Monday, and treasured by its new owner!

Harry Kernoff, From the Custom House Steps, from Whyte’s.